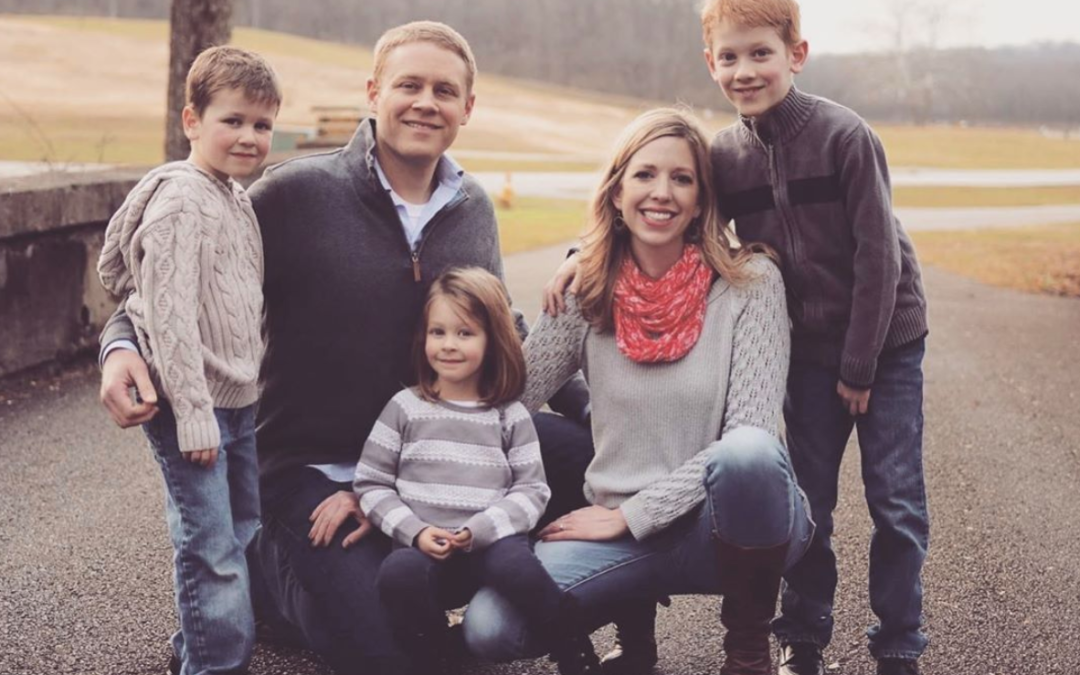 The Insta-polished version of my family life looks like this: three smiling kiddos, happy homeschoolers, my husband and I rocking our marriage and self-employment. But friend, there are so many unseen hard parts of our story.

These dark, rocky places used to feel like curses. But now, I see them as enormous blessings. I’ve watched firsthand how the story of our rough patches has impacted others for good. I’ve been privileged to watch people find hope and healing through our pain, and for that I am so, so grateful.

So today, I want to share a bit about our journey with you in case you need to hear it.

I still remember where I was when my husband, Paul, called to tell me he’d lost his job. I was juggling my one-year-old daughter on my hip in the front yard, while my two little boys zoomed Matchbox cars down our sloped driveway. We hadn’t seen it coming, and the job loss knocked the wind out of both of us. But little did we know this event would be the least of our troubles to come.

After he was let go, my husband gradually sank into a deep depression. It happened so incrementally (depression can be a sneaky little bugger) that we didn’t even realize it until he was neck-deep in the muck. And at the time, we didn’t even know to label it depression. Neither of us had walked through anything like it before, so it took a formal diagnosis to comprehend what was even going on. When I thought of the term “depression,” images of someone rocking in the corner, crying all day, or sleeping non-stop came to mind. That was not my husband. Most days he was up and about and seemingly happy. But I knew something was off. He was slowly disconnecting from himself, people, and feelings day by day. By the time we sought help, nearly a year had passed and it felt like the train was going off the rails. Our marriage, finances, emotional and physical health, and so much more was a mess.

While trying to start untangling the depression and the many messes it had made, Paul and I noticed a mole on his arm that started to look funky. Being in the state he was in, he ignored it for months until I finally pleaded with him to see a dermatologist. The diagnosis: melanoma, the mack daddy of skin cancers. After surgery and a lymph node dissection we were given the horrendous news that the cancer had spread. The word ‘metastatic’ became an unwelcome part of our vocabulary and the prognosis wasn’t good. But my husband was so deep in depression at this point that the news barely seemed to phase him. It was just one more thing.

By now, I felt myself unraveling. I was spending enormous amounts of energy trying to hold it together for my family. And the rest of my resources were devoted to keeping it together in front of the rest of the world. Other than a few very, very close friends and family, I was putting on an epic “I’m fine!” show for the rest of the world. Most of my clients, colleagues, neighbors, and even friends were completely unaware of the depth of pain my husband and I were experiencing.

Fast forward about six months after the initial melanoma diagnosis. By then Paul had undergone surgery and we had sought multiple opinions from reputable Midwest hospitals.  Everyone confirmed our worst fear—his lymph nodes were likely riddled with melanoma and chances were good that it had already (or would soon) spread throughout his body. The course of treatment would be a fairly radical lymph node surgery and a year-long drug therapy that would render him in bed most days with flu-like symptoms. And it may not even work. We were preparing for the worst.

A few weeks before Paul was scheduled for his second surgery, we had what we thought might possibly be our final picture taken as a family of five. And then we sought a last-minute (fourth or fifth) opinion on Paul’s course of treatment from the University of Michigan. They called us a week or so after our appointment and asked us if we were sitting down. After doing their own analysis, they were convinced that all the other hospitals were wrong. They believed that my husband’s melanoma had been confined to the skin on his arm, safely having been removed already with no likely further threat. What?! We were speechless.

You’d think that this incredible news would have resulted in much rejoicing. But depression.

Once the cancer scare had been lessened in a big way, we were left with this gray, tangly mess of depression that in many ways felt harder to battle than cancer. And hear me out: I’m not making light of either situation. They’re both heart-wrenching and devastating on so many levels. But with the cancer, we felt like we had a plan of attack. We knew what we were facing and the concrete steps needed to battle the beast. And people around us knew how to rally. Meal trains, GoFundMe pages, and tangible help made our load feel a little lighter.

But depression is different. It’s hard to define, hard to understand, and hard to talk about. Often shame and misunderstanding are woven into the situation. Depression looks and feels so different in everyone, and there’s no magic formula or quick fix. And to add to the weight of it all, even if you are open with others about what’s going on, people often struggle to know how to show up and help. (Ever seen a meal train for someone struggling with depression?)

When it was all said and done, we spent nearly four years battling the beast of depression. But looking back, I believe we could have massively shortened that amount of time had we realized what was going on and taken steps towards healing. I want to share just a few of those steps right now. Maybe there’s one you might even need to take today.

More than anything, I want you to know that there is so much hope. I desperately needed someone to look me in the eyes and tell me that when we were in the pit. I remember feeling like there was no way out. That life would never get better and this was our new normal.

But through therapy, seeking wise counsel, support, and tangible help from those we love, and practicing self-compassion and self-care, we found so much healing and growth. And honestly, as cliche as it might sound, we wouldn’t trade what we went through for the world. Our hard stuff shaped us into the people and family we are today…more grounded, empathetic, grateful, and peaceful than ever before. Life today looks like waking up without feeling the weight of the world on our shoulders; having the energy and clarity to pursue our passions; being able to be fully present for our kids and each other; and having immense gratitude for each and every day in the light.

We know that this season of goodness might not last forever. As humans, we are destined to go through trials of all sorts. But we’ve learned how to take better care of ourselves and each other. And we know the steps we need to take when darkness starts to creeps in. There’s so much power in knowing that while you can’t control everything, there are concrete steps you can take towards healing and wholeness no matter your situation. You have far more agency in your life than you think.

If you find yourself in a dark place right now, please know this: you are absolutely not alone. And there are people, resources, and a path out of this muck just waiting for you to take the first step.